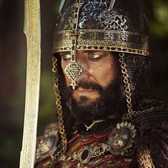 This could be the greatest TBS game of all time!